The Power of Photo Editorial Decisions 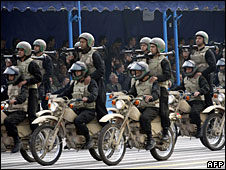 Speaking at the parade, President Mahmoud Ahmadinejad said Iran was the most powerful nation in the world.

The laughable statement made by Ahmadinejad is just another in is list of half-truths and lies that he's said on the world stage.

This however, is not what I want to address. This article, which is not much more than large blurb (it has no direct quotes, is only 11 paragraphs), is accompanied by the photograph above.

Now, I can guarantee that there are shots of large missiles, tanks, and even the 200+ aircraft that flew over as part of the parade. The editor, however, chose this rather humorous picture of Iranian troops on ¿dirt bikes? It looks like they're riding two to a bike.

I think that this a perfect example of editorial bias – for the better.